It’s not often you stand on a stage next to a sample of human feces.

Humans are using up earth’s biomass

Looking at the impact human activities are having on the web of plants, animals, and other life forms that compose the Earth’s biosphere, and what it means for our future.

By “this,” I don’t just mean the rainforest you see in this photo. I mean everything that can be consumed on Earth: plants, animals, all of it. And by “we” of course I mean people.

It’s such a big question that many people wouldn't even know where to start.

But if you care about understanding the impact that humans are having on the Earth, and what that means for our future, it’s a crucial question. Vaclav Smil sets out to answer it in his book Harvesting the Biosphere: What We Have Taken From Nature.

There is no author whose books I look forward to more than Vaclav Smil. He jokes that no one reads his books (he’s written more than 30 of them). It’s true that each book only sells a few thousand copies. But I’m trying to read everything he writes.

Why? He understands a phenomenal range of subjects, from energy to agriculture. On any page he might talk about meat-eating among bonobos or the average human life span during the Roman Empire. Plus he is rigorously numeric, using data to illuminate every topic he writes about. The word “polymath” was invented to describe people like him.

In Harvesting the Biosphere, Smil gives as clear and as numeric a picture as is possible of how humans have altered the biosphere. The book is a bit dry and I had to look up a number of terms that were unfamiliar to me, but it tells a critical story.

Smil starts with a big question: How much life is there in the biosphere? By “biosphere,”he means everywhere on earth where there are living things: in the air, on the ground, and in the oceans. I’ve been thinking and writing a lot about measurement this year, and I was very impressed with how rigorously he thinks about this problem. Ultimately he concludes that the dry mass of all living things on Earth is about 1.6 trillion metric tons. (Because living things contain different amounts of water, Smil makes these calculations using dry mass, which leaves out the water.)

Smil tries to figure out what portion of the biosphere's primary productivity—the amount of plant life generated each year by photosynthesis—is consumed by humans. He estimates that we will harvest roughly 17 percent of what the biosphere grows this year—mostly plants. (He admits it could be as little as 15 percent or as much as 25 percent.)

He describes vividly how humans’ impact on the Earth has changed over time. We first had a big impact roughly 10,000 years ago, when we figured out how to burn down forests to clear land for crops. Today we harvest crops for four main purposes: to feed animals, feed humans, generate fuel, and make paper and construction materials. Smil shows how out of all these, the first two are responsible for the biggest impact on the biosphere. About 12 percent of the Earth’s land mass is now devoted to farmland. 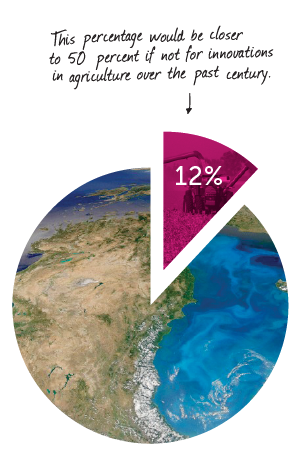 Twelve percent is a big number, but it would be even bigger if it weren’t for innovations in crop breeding, field machinery, and other areas that made farming much more efficient. If crop yields had remained stagnant since 1900, in the year 2000 we would have needed nearly four times more crop land to feed everyone. That’s practically half of all the ice-free land in the world.

We’ve also had a huge impact on the biosphere by building major cities, which essentially eliminate or drastically reduce any natural productivity from those areas. Smil notes that major cities now cover nearly five million square kilometers. If you clustered them all together, they would cover an area 50 percent larger than India.

In the course of reading the book you learn a great deal about how population and consumption have changed over time. It is amazing how little meat was available in most diets as recently as 1800: just a few kilograms per year, versus about 100 kg of meat per year in an average American diet today. (The average Indian, by contrast, eats about 10 kg of meat each year.) The world now harvests far more crops to feed animals that produce meat, dairy, and eggs than to feed humans.

But in some ways we've been less responsible in the sea than on land. We don’t harvest a high percentage of all the life in the sea, but we concentrate on a very few species—especially carnivorous fish, like cod and tuna. Smil writes that most of the traditionally targeted species and major fishing areas are now being fished to capacity if they’re not already overfished, near collapse, or collapsing. It’s a sobering picture.

What does all this mean for the decades ahead?

Smil looks at the future with some concern. As more people join the middle class, they will demand more to eat, and more meat in particular, which will put an even bigger strain on the biosphere. He lists a number of steps we could take, which boil down to various ways to manage resources more carefully, stabilize the global population, and pursue research that will raise crop yields.

I was a bit surprised that he didn’t talk more about innovations that will help avoid some of the problems he’s concerned about. For example, he writes a lot about the impact of meat-eating on the biosphere. Producing meat is very inefficient: To get 1 kg of edible meat from a cow, you have to feed it about 10 kg of grain. But he doesn’t mention the possibility of making alternatives to meat, which could reduce the inefficiency and the need for additional crops. (A few months ago I posted a neat feature about research on alternatives to meat. I’ve tasted a few and they’re very convincing.)

I had a chance to ask Smil about this when we met this year. He pointed out that humans eat about 300 million tons of meat a year, and producing even a small percentage of that amount in meat alternatives would be a real challenge. I agree that it’ll take more research, but I remain optimistic that it could help reduce the impact of meat-eating on the earth.

Anyway these criticisms are relatively minor. If you want to learn about agriculture or the environment and you have the patience to stick with it, this is a great text.

In Harvesting the Biosphere, Vaclav Smil carefully adds up how much life exists on Earth. Without moralizing, he makes a convincing case that humans could soon consume an unsustainable share of life on Earth.

The best memoir by a rock star I actually know

I’m lucky to call Bono a friend. But his autobiography still surprised me.

The best guide to getting out of your own way

A profound book about tennis and much more.

The best guide to leading a country

Doris Kearns Goodwin’s brilliant biography of Abraham Lincoln is more relevant than ever.